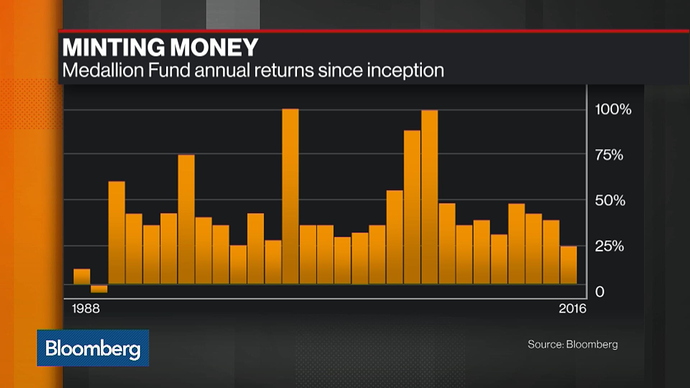 One year of big returns is just luck, both for algo and discretionary traders.
The longest manual trackrecords are ULI an UYZ .
HFD CIS SKI are very promising but they lack 2 years native or 3 years total.

I never found a public trackrecord with high return for many years and I am monitoring etoro autotrade and darwinex .

I never found a public trackrecord with high return form many years and I am monitoring etoro autotrade and darwinex .

Ok but but a story can’t be my bechmark I want facts.

My benchemark are CTAs , Dunn Winton Medallion …
Here my benchmark are ERQ NTI WFJ PLF
There are automated traders that lost their edge after 12-18 month but there are also many manual traders with the same fate.
I was investin RUG and JCW so being manual isnt’ a guarantee of robustness.

Believe me,I posted truth.I was watching it real time and I could unearth it from Archives and post it here but it would be unfair to Darwinex.
Problem with Discretionary traders is,as I posted earlier,Discipline.That is why I gave support today to CIS.I want that guy succeed and get this Darwinex idea growing.

I believe you but how many years of trackrecord 1-2 ? Can be luck…
Exact the problem with manual traders is than they tend to self-delusion, even if they are honest they dont’ know the behaviour of their strategy on many market conditions, they only know that it is going wery well with the present condition, often they are overfitted to present, when they face a serious DD they give up.

When I started studying Darwinex at the beginning of 2015 this was the “guru”
https://www.darwinex.com/darwin/WCC.4.3/
Old school manual price action on daily timeframe, very nice!

I could unearth it from Archives and post it here but it would be unfair to Darwinex.

Hello, I’m trader behind HLA. I have several accounts on Alpari. The oldest is https://alpari.com/ru/investor/pamm/202131/ Trade strategy on my darwin HLA is the same

In my opinion there is nothing bad to link trackrecords from other sites, AlpariPAMM has already been linked, also myfxbook , Zulu or mql5.com .
Darwinex is the best but it is relatively young, we need a larger sample of traders to understand what can or cannot be acheived from the market.
Our goal here is not to advertise but to discuss about investable or not investable traders.

we need a larger sample of traders to understand what can or cannot be acheived from the market.
Our goal here is not to advertise but to discuss about investable or not investable traders.

OK,since that is not my stuff and to avoid any trouble,I will post screenshots to analyze his trading method.

Here is whole Equity curve.He actively day-traded for 16 months and then stopped and only sporadically traded for 5 months and closed account.

Next ,his Daily chart with Leverage above and Return below.Mostly he closed his trades the same day or next day.Leverage shows that nicely. 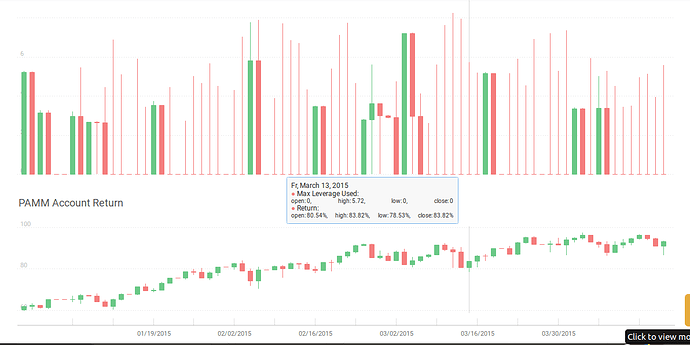 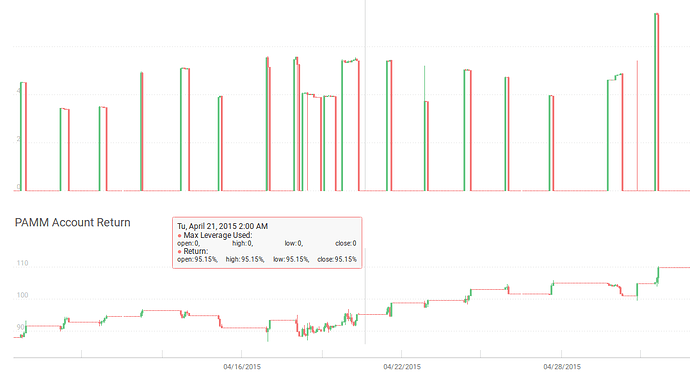 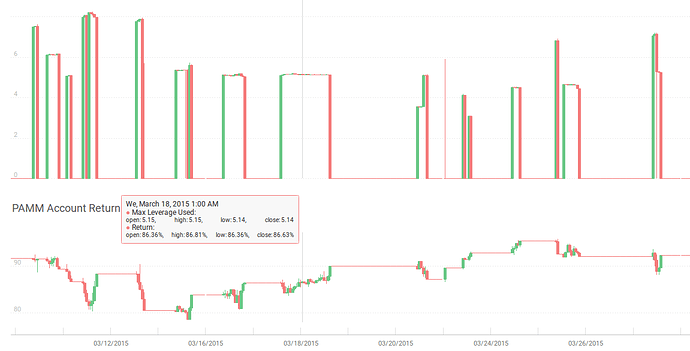 Screenshot at 2019-10-13 14:16:26.png1151×587 20.2 KB
You can see remarkable Discipline in terms of Loss Aversion and solid Timing.This trader didn’t add to losing trades,but took loss and frequently reversed position and got his loss back.That is telling me he was very good Price Action trader and used many times his well placed Stop-loss as strong signal to follow the market in the opposite direction.Many traders start adding trades and Leverage in such moments and that is how troubles start.

There was one big spike in Leverage in his first 3 months and people later asked him what was that.He said it was a mistake and as soon as he noticed it he closed his exposure.Here is Hourly chart of that incident and I tend to believe him,Return chart shows nothing dramatic during that time,considering high leverage. 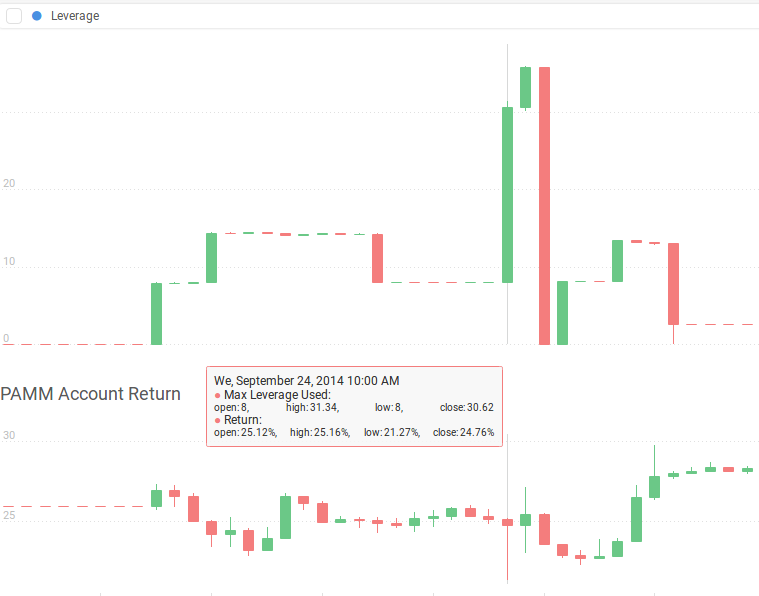 All in all,very boring trading.No drama,no big wins,no big losses,no overtrading,no games with leverage,Loss Aversion,no big trends.DD was constantly contained in 10-16% from beginning to the end.He traded only Euro all the time.
In terms of Risk,he was Master of the game.In terms of profit he was showing positive Loss Aversion by cutting his winners short.Probably he could get even more Profits.
Enjoy!

His edge lasted for about 1 years, than DD came and the trader gave up, has been seen many times also here.
Return was high because risk profile was higher, probably something like var 20%.
After 2 months of DD he reduced the risk and after another quarter of stagnation he stopped.

What DD?I just wrote he was fluctuating all the time in 10-16%DD.When he stopped actively trading he had 16% DD.That is nothing and he was used to it.
VaR20% with average leverage 6?Darwins here are trading in such time frame with 5-10 Leverage ,if I see correctly.20-30 trades a month?Is that too much?
CIS darwin has such profile last 5 months and if I see correctly,that darwin has almost 7 Leverage per position.HFD has average trades for 20 hours and average leverage 5!

After 2 months of DD he reduced the risk and after another quarter of stagnation he stopped.

His top was mid-July,he stopped actively trading mid-September.Chart is little misleading.There was no Quarter of stagnation,activity dropped abruptly for some reason in September.He had 2 short trades during the following month and that was all.Maybe some family problems or somebody died.

If you don’t call it drawdown call it as you want, he was making a new high almost every month for one year til July 2015, than no new highs for 6 months and he closed the shop.
Just a temporary gift

, or maybe he wasn’t standing the pressure of an AUM.

Yes don’t you see the reason for this??

If a trader can return 3 consecutive years of 30% return, he will not need to list his strategy for the public investment, especially at Darwinex. Believe me, once I accomplish that feat, and believe me I shall do it some day soon, I will close down all Copy Trading, small sites such as Darwinex and Zulu, and just have a very private PAMM that I manage without opening up my identity, returns, data to scrutiny and further issues that I don’t need to mention if you don’t already know about them.
You seemingly refuse to acknowledge this. That’s why Darwinex is doomed to stay small AUM basically, and only 5 to 10 providers will make enough money from their management to really focus their energies here or to live well off their fees.

I’m treating my participation here just as an interim measure.
And exposure to investors (marketing) for later in my life.

.He traded only Euro all the time.

If it were so easy to make money with naked price action Nial Fuller would be managing millions.
The point is that when market is easy everything works.
When the money machine broke the trader started to reduce the frequency waiting for the edge to come back and he finally stopped.

f you don’t call it drawdown call it as you want, he was making a new high almost every month for one year til July 2015

Listen,I posted Daily chart of his period when he was stagnating for two months and was fighting the market and keeping perfect Discipline and then I zoomed in on hourly charts,so you could see how that fight was carried on.And he already had hundreds of thousands AuM there.I have chosen that period on purpose to see the quality of that trader.It is no point looking when everything is fine.

When the trend ended my simple trendfollowing strategy stopped working

Didn’t I just posted in my first post that he was reversing his trades and kept his Risk and Return in check with that technique?That guy was trading in both directions all the time.

the trader started to reduce the frequency waiting for the edge to come back and he finally stopped.

Seriously,you stop trading and wait your edge to come back while you are not trading?

That guy was trading in both directions all the time.

I was also trading both directions and I was trading 8 assets, I had a SL of 70 pips and a TP of 140 pips.
There were strong trends on many pairs and trendfollowing was very easy.
I am not used to overanalyze single days or single trades, the point is that his stratergy worked for one year and than game over.
He certainly was more skilled than me but the point is that when something works too well on a given market condition it will fail on everything else.

Our hero HFD made on that platform some serious results without interference of Darwinex Risk Manager.I post this for purpose of debate about small Capacity discretionary traders.DD is measured more strictly than here at Darwinex.It is measured from point of highest unrealized profit to the point of lowest unrealized loss.That is for 17 months of trading.Less than here. 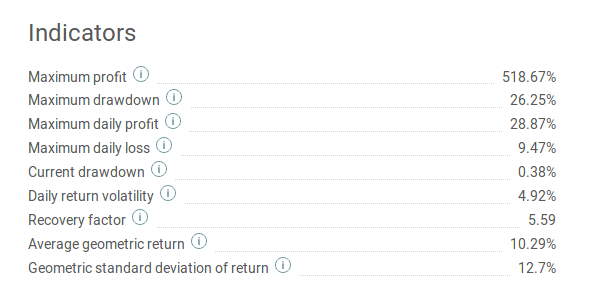 If you cut that performance to 0.66 for difference between average used leverage between HFD and that Hungarian guy ,you get the same results.Will you tell me HFD is also following some trend for last two years?

I will not post pictures,because I cannot leave out identifiable data and wouldn’t be ethically OK,but there is a guy who has 5 year trackrecord and 124 000% realized profit and I wouldn’t believe it myself if I didn’t watch him grow at earlier stages and now,I saw how far he climbed.He has 2mil.AuM now and realized little more than 1.5mil. profits for his investors.Personally,I dislike that guy because I saw how he traded earlier and how much investors money he squandered with his Martingales,but that bastard is either extremely lucky or he learned something.

exactly my point over and over again with Grids or Quasi-Martingales.
They can do extremely well if you tweak the Risk management with MFE/MAE studies on various strategies.
I have seen others do it well on SimpleTrader – TickmillLN (also Romanian) ovisun trader and Blackwave Alpine
I’m sure there are others, as I have studied their style extensively and believe it is robust and true.
Follow Kelly Criterion as Ed Thorpe did.