The ‘back tester’ on SCS for example shows a 20% divergence from when they joined end July 2018 - giving 4% to an investor rather than the 24% the darwin got,

Is the only way to get this info via the backtester?

The monthly divergence & Latency on the dashboard is at only -0.11 which makes me wonder how its calculated?

The figure you have described is the current divergence. The historical divergence can be seen from the Investors tab (tick the Divergence box).
You can see from the screenshot that the divergence went to a massive -8% back in March (to howls of protest from some Investors). 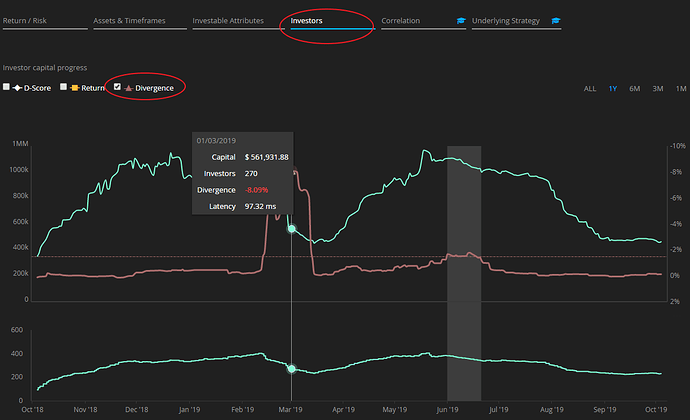 I am using this threat to not have to create a new one. Hope that’s fine.

I am trying to understand my tools to measure Actual Past divergence: 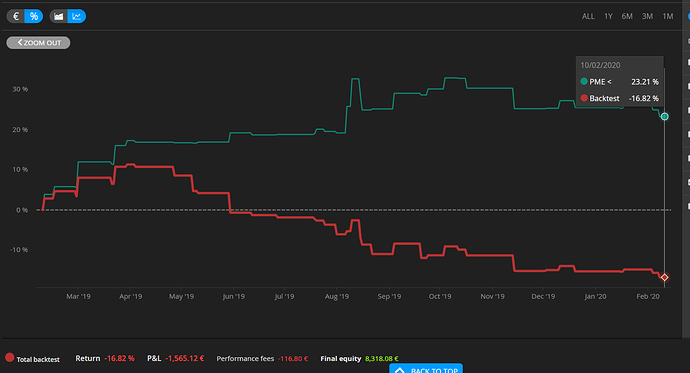 QUESTION - Is the following correct?

There are only two things that differenciate the theoretical Darwin’s return (+23.21%) from my simulated return (-16.82%):

Is there another tool to measure past real divergence? This gives me a good indication but doesn’t give me the exact % of accumulated divergence I would have “paid for”. Is the following calculation correct?

You don’t pay performance fee if you lose because of divergence, it is calculated from your net profit for each 3 months after divergence.

Thanks for your reply! I understand in the case I am posting I would have paid formances fees during the 1st quarter because during the first three months there was net profit (around May19). From there the return went negative and I would not have paid performance fee for the other 3 quarters.

I don’t have a better calculation for divergence than yours at the end of your first post.

Thanks for your query.

The best way to evaluate a given DARWIN’s divergece is by checking their divergence chart under the “investors” tab.

I hope this proves helpful!

Surely that chart is the best option to see someone’s Divergence… But strictly speaking I don’t care about Divergence itself, I care about its effect on my return… And that’s the piece I was missing.

This was my (noob) thought process: I felt like I had no way to quanitfy (nor even remotely guess) the actual impact of divergence in the return. Actually, I was very surprised to discover that PME’s accumulated divergence for a year (Feb19 to Feb20) was -38% (huge)!!! I was expecting a lot less (for some reason)… By looking at the chart, the divergence stays around the -1.5% threshold most of the time, so I thought maybe the impact is not that bad.

I am glad @IlIlIlIlI validated my “past real accumulated divergence” calculation, I feel like I’ll be using it.

So what do you guys think of this idea?

In the monthly returns table…

To add, through a pop up, the return already shown, minus the “real past divergence investors suffered”, on each monthly/yearly return. An alternative would be to add another column, to the right of Total with the yearly return minus divergence.

I am not in a position to suggest anything, this is for the sake of speculating/discussing/brainstorming

I want you to notice that PME cannot be bought (only sell button) and there are no investors.
I think the reason is indeed this high and wild divergence.

Thanks for your reply, @Qaytarlah!

Actually, I was very surprised to discover that PME’s accumulated divergence for a year (Feb19 to Feb20) was -38% (huge)!!!

I would highly recommend the comment I posted a while ago:

Here we go! Divergence disclosed in a DARWIN’s section does NOT refer to divergence experienced by investors in the past, it is an estimation of the divergence that is likely to take place in the future, based on divergence data from the 100 most recent orders. Divergence measured in the DARWIN’s report section is the divergence owed to: Lack of liquidty in the market when replicating a trade on behalf of investors Excess of volatility in the underlying strategy when the trader places a trad…

As explained back then, divergence disclosed in a DARWIN’s section does NOT refer to divergence experienced by investors in the past , it is an estimation of the divergence that is likely to take place in the future, based on divergence data from the 100 most recent orders.

As an investor, you should rather care about the information disclosed in the investors tab (which actually reflects the exact divergence experienced by investors) rather than the estimation calculated based on current divergence figures.

I hope this helps!

PS: As correctly mentioned by @CavaliereVerde, PME is closed to investors precisely to avoid users investing in a DARWIN with such a great divergence. 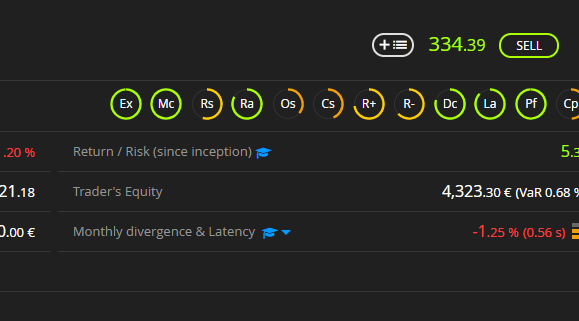 I should have added I have no interest in PME itself, I am just trying to get my head around divergence and I used it as a random example for my “study”… My bad haha.

Thanks a lot for your reply. I’ve read carefully your comment and the linked article, as well as wathced the video there. I am clearer now.

My mistake, I has missed this chart!!! I have spend a number of hours exploring Darwinex and I never knew this chart was there, my bad. That’s exactly what I needed, and turns out I had it alreday.

One last question, in regards of the chart showing Divergence and Invested Money. Is the last data point of such chart always going to coincide with the number displayed in the main page of the Darwin?. -0.41% for THA 17feb20.

I assume yes, which would mean that such chart is not a representation of the real past divergence on each day, instead is a chart where each daily data point is the estimation of divergence based on recent trades. Am I correct?

Thanks for your query, @Qaytarlah!

The best way to track real divergence would be through the Backtest feature (https://www.darwinex.com/darwins-backtest).

Please note, however, that such tool accounts for performance fees, too, so you’d need to check periods shorter than 3 months to track divergence (without the effect of performance fees).

I hope this proves helpful, please do let us know should you need further assistance!

Hey Ignacio, thanks for staying with me here. Apologies for what’s ahead hehe:

Let’s zoom out. In my last post I (thought) understood the tools to look at past divergence (“backtest” + “investors’ tab divergence chart: Divergence in %”) so I was asking about a different thing: The “divergence-investors chart”.

Back to my initial question which hasn’t been answered.

The next findings are a bit confusing, may be a got something wrong, apologies if that’s the case. Since you implied one method being more reliable than the other, I wanted to see the differences:

B) “investors’ tab divergence chart named [Divergence in %]”: From 14thJan to 11thFeb shows THA had a Divergence of -0.97%. More than 3 times more than the other method.

If I do the same comparison but on a period of a year (making sure I substract the performance fee, in the Back test method). The difference is much smaller but still significant: