I’d like to indroduce my Darwin FHT and provide some details on how the underlying strategy is traded.

I’m a retail trader with about 6 years experience. As most traders I have made lots of mistakes and experimented with many different strategies (there’s a hint in my username

) before finally settling on the strategy I’m using now. It has been quite the learning experience and rollercoaster of emotions, until I stopped babysitting my trades and started adopting more of a “set and forget” mindset.

I’m planning to provide monthly updates at the least, and reply to questions as soon as possible.
Should you have any more questions and/or suggestions on what to include in the monthly updates, please do let me know, and thank you already for taking the time to read this introduction.
Good luck to all traders and investors alike! May the fortune be with us

October has passed, so it’s time for a monthly update.

In this topic I won’t spend much time on presenting stuff that you can easily find out yourself by checking FHT’s page, like this month’s Gain or Loss and changes in DrawDown. I would rather talk a bit more about things that are not (easily) found on Darwinex, like why some values are what they are, and the underlying strategy, otherwise known as “the trader’s edge”.

And secondly, I have joined @Livenemaxx’s Discord server where I am available to chat in the group channels, or by Direct Message if you have any questions. I highly encourage everyone here to join as a means of interacting live with traders and investors alike.

Happy trading/investing to all, and see you early December for the next update!

November is over so we’re due for an update.
It was a rough month.

Many more Stop Losses were hit compared to Profit Targets.
In the trading journal, we can see 3 periods. First a decline in the underlying strategy of about 11%. Then a period of stabilization with some hopefull pullback out of the drawdown, and then ruthlessly slammed down again for 7% from ~ -6 to ~ -13%.
The first period was caused by a personal bias that USD was about to weaken, based on the DXY chart at that time, but this didn’t happen and I got a bunch of trades going against me.
The third period was caused by an expectation of JPY to strengthen, and here again the opposite occurred, resulting in a -13.68% November for the underlying strategy, translated to a -8.29% on the Darwin due to my trading at 15% VaR. I’ve lost money this month, along with my investors, but I’ve gained more insights. 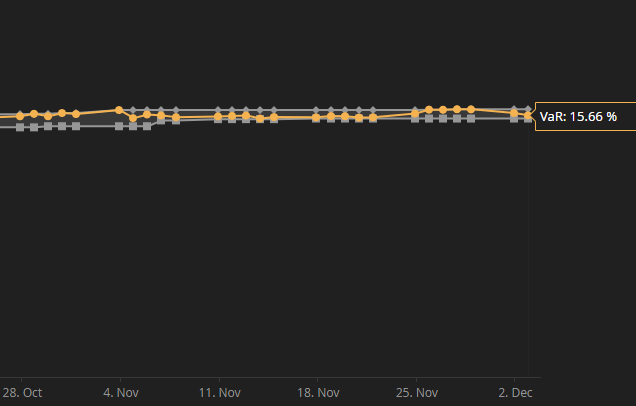 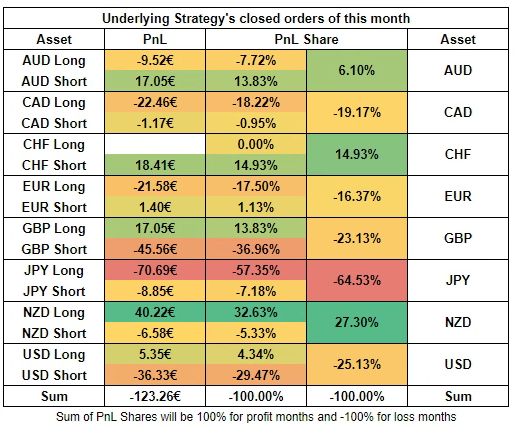 Another thing that “went wrong” this month is that I was analyzing the October performance. I work with a few different signals to enter the market and during November, I was not acting on the weakest performing signals of October. In hindsight that was a big mistake, because if I would’ve just acted on all my signals, like I did in previous months, November would’ve closed slightly above break even.

But it’s not all bad news. One thing that FHT was lacking up until now is robustness, by demonstrating that it has the ability to recover from a drawdown. The opportunity to prove that has now arrived.

So what does that mean for December? Well, we’re going to act on all signals again, and we’re going to be less “stubborn”, or “getting stuck” in a bias about a currency’s strength or weakness. Back to “Trading what you see, not what you expect”.

As for Investors, I got one additional investor in November, right about the time I posted my October update. Unfortunately for this new investor, they bought FHT at the all time high quote, so they are experiencing the drawdown to great effect right now.

For my investors I have the following message: For most of you, the Performance Fees are due in 2 Months. Currently I’m getting 0.00€. By the time the Quarter ends, I do sincerely hope to get my first batch of Fees, and the only way for me to do that, is to get out of this drawdown and make a new high, so that is, and always should be, the most important goal moving forward.

As always, happy trading/investing to all, and see you in January for the next update.

A bit sooner than ‘End of Month’ comes the December update. I’m posting now already because last week Friday my last open position closed, and I was never going to open any new ones this week. Trading on FHT will resume on January 6th

As mentioned in the November update, I was not going to exclude a selection of entry signals anymore, and also reevaluate our currency biases, and it showed. FHT has had a green month again, and even better, it was the best month to date (thanks Pound Sterling!). In fact, FHT is only 1 or 2 winning trades away from a new All-Time High. To my investors, I want to say thank you for not giving up on FHT after the bad November, and I hope to reward you even more for your confidence in 2020.

As you can see from the journal we had one little D-leverage spike. This spike appeared when I opened a Long EURGBP trade on 16-Dec with a short GBPUSD trade still open from right after the general election results in the UK. I used the same position sizes as I normally would, but the algorithms must’ve deemed double exposure on GBP as a noteworthy increase in D-Leverage. Luckily it didn’t hurt the Risk Stability attribute too much.

Speaking of Risk Stability, this brings me to:

I have noticed that I’m doing pretty well on the D-Score front if I compare FHT with Darwins with equal or less experience. (at the time of this post, FHT’s Experience was exactly 2.80 but I had to set the filter to 2.9, or FHT was not included in the results).

This leads me to believe that I would actually have a good shot at DarwinIA allocations starting from mid-2020, when I have a few more months of Experience. To further increase my chances for allocation, I have decided to bring the VaR of the underlying strategy down from ±15% to ±10%, but not lower, to avoid the PnL swing to become too big for my investors. This will be done by funding the account a bit more rather than reducing position sizes, again because of DarwinIA reasons, so that IF I would ever get a Top 80 spot, I’d get as much actual allocation as possible.

December Trades per Currency
Here’s the underlying strategy’s performance in December per currency. 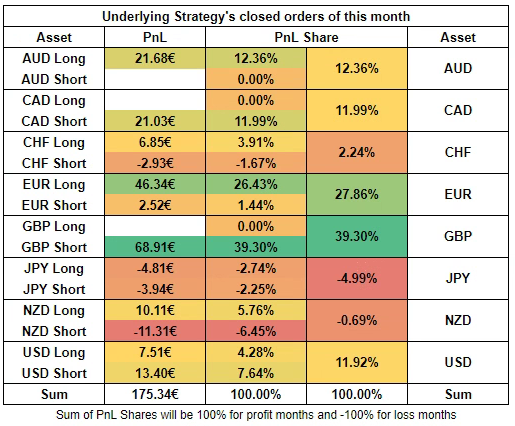 JPY kept going against my expectations through December both in Long and Short directions and was therefore the worst predicted by me. The Lion’s share of profits in December came from GBP, and as you can see, I only went short. No pre-election positions were opened to avoid any unpleasant surprises, and all GBP trades were taken post-election when GBP’s direction became more clear.

The next update will be posted in early February. In the meantime, happy holiday season and a successfull January to all!

Nice start FHT - a few quick observations - approx. two-thirds of your trading pairs lose money and mid week trades also ( Tues/Weds), as I am sure you are already aware; so anything you can do to minimise this going forward would really help your P&L. My guess is that these are your hedging trades yes? Overall your positive/negative excursion chart is one of the best I’ve seen on DX. Your great LA & RS values together with acceptable divergence makes this a very promsiing Darwin!

Thank you for the kind words @marketserpent,

For the Currency Pairs Statistic, the stats would look slightly better if the 50/50 pairs were green rather than red

Also noteworthy is that it’s not necessarily true that pairs in red on the pie diagram lose me money, or pairs in green gain me money for that matter, let’s have a look at two selected pairs:
EURJPY: 9 trades, 44,44% winners (thus in red), but total PnL on this pair +57.89€
NZDCHF: 5 trades, 60% winners (thus in green), but total PnL on this pair is only +6.77€
(sorry I couldn’t find an example where pie chart was in green, but PnL was negative

My strategy works with Entry Alerts whenever something happens on the chart, and then I evaluate the relative strength of both currencies in that pair against all other major currencies, it’s chart and price action, and any recent news or economic numbers related to one of the currencies. Only then will I decide to act on the Alert and enter the market or not.
I am monitoring this particular statistic and I’m evaluating on an ongoing basis whether these “less than 50% profitable pairs” are producing more fake Entry Alerts on average, or if I’m just worse at analyzing and “pulling the discretionary trigger” on these pairs. I believe the sample size is currently too small to have a definitive answer either way, and the situation gets even more difficult to evaluate if you know that I sometimes cannot act on entry signals that in hindsight turned out to become a good trade, just because adding an extra open position would harm my personal risk appetite, and also the RS attribute. For now, it is too soon for me to completely exclude certain pairs from my watchlist, but it is possible that it could be done in the future.

For the Weekdays Statistic, I’m fairly sure this is just due to the sample size for now. As you can see from the Assets & Timeframes page, my trades are open for more than 2 days on average, so it’s not necessarily trades that are opened on Tue and Wed that are the bad ones. Also, as far as I understand Darwinex, this Weekdays stat is based on (floating) equity, and not (fixed) balance, so a winning trade that was opened on Monday or Tuesday, could be floating in loss at first, then turn profitable later in the week, then close firmly on profit on Friday, and still have caused negative performance on Tuesday and Wednesday.
Envision a Weekly candle on a chart. If it is a strong bullish candle, the low will most likely have formed in the first half of the week.
In any case, the combined negative performance on Tue and Wed = -7.21% at time of writing. Monday (+7.99%) and Friday (+15.73%) individually completely cover those on their own, and Thursday (+6.49%) almost does so

I am not actively looking for ways to improve the Weekdays stat to get all green days.

To further increase my chances for allocation, I have decided to bring the VaR of the underlying strategy down from ±15% to ±10%,

Due to the upcoming changes to the Risk Manager detailed in this Blog Post, there is no longer any point in reducing the VaR on the underlying account as planned. In fact, it would be disadvantageous to do so for at least the first 6 months. Therefore, I am stopping my VaR adjustment strategy, and will keep trading at around ±15% on the underlying account.