My needs are very simple, since I trade mostly naked charts.
I put some efforts to buy some paid indicators at the MQL5 store to cover needs that should have been at disposal from factory : simple candle timer, candle on higher timeframe which is the most luxury I’ll go for. 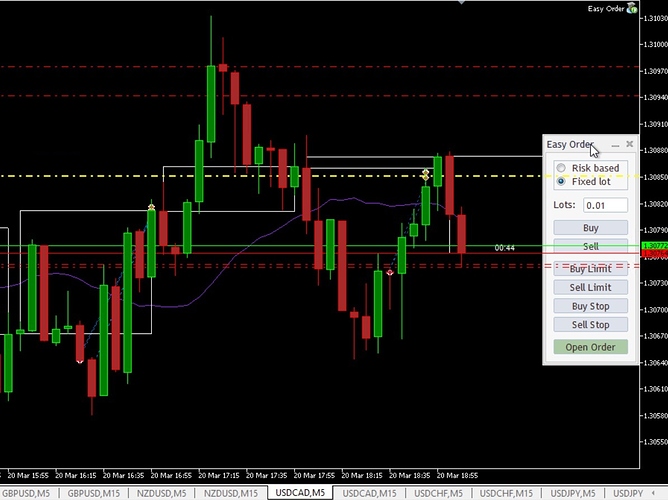 I got delighted to find out that the third party coders are often very capable by the way. Now I’ll have to live with overall platform freezes from time to time (protected codes I cannot open to address an eventual fix)

Hurray to the joys of relying on a tool kit !
Just like not everyone should deserve the pass to title themselves a trader, the same goes true for programmers making a living of it. That’s why I prefer the consistancy of full in-house platforms going a long way deep into incorporated functions.

Anyway, within SierraCharts, I am used that parent&contingent + OCO manual orders are linked on the chart by association lines so I can figure out at a glance where the order groups connect and which ones belong to each other. This is a ground feature.

On MetaTrader, not. Worse, I am left to regret very basic needs that go uncovered. One of them is that I cannot even set a different color to distinguish TP from SL orders. This sounds silly but it becomes quickly a confusing mess impossible to manage without wasting enormous amounts of time and energy for an active discretionnary trader. My decisions keep at a pace every 5 minutes on numerous charts. I can’t struggle against the platform in between.

Please if you got an EA that is capable to hook order detections and recolor the lines on chart (keep same style), I’ll be glad to take it. I don’t feel like diving into mql5 code to achieve that goal only. Thanks (haven’t found a script from browsing online)

If you got an EA that could draw on chart “association lines” between entry/TP/SL (or just TP/SL), and manage to shift slightly (auto-placement) between grouped association lines so that they don’t overlap so that I could distinguish order groups clearly, I would be willing to pay for it eventually.

For the discretionnary traders, here is an order management helper that is quite convenient to render the platform more practicable on a frequent basis.

Easy Order is an Expert Advisor allowing you to enter any type of trade with one click based on your RISK preferences. You can choose to enter a... - English

Easy Order is an Expert Advisor allowing you to enter any type of trade with one click based on your RISK preferences. You can choose to enter a... - English

Worth it for the money, although I must comment that the graphical UI can be buggy and dupplicate itself at times on the chart, then the cloned UI being unresponsive, there is no escape than to remove and reply the indicator.
This bug applies when you move / displace an overlay graphical UI and is not dependent on neither MT5 nor this particular EA. It would happened to me with other EAs on MT4 just the same.

Edit : what I am talking about “ghost UI”. 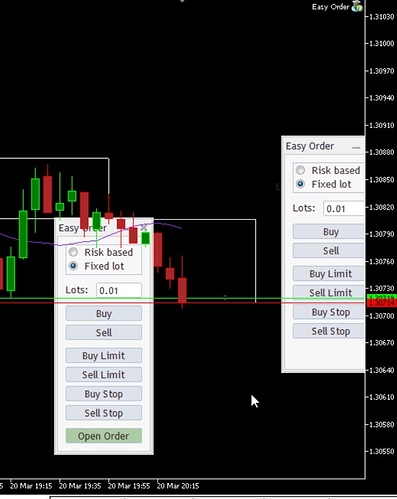 98477DBE-7732-4216-92DD-99CBFE093587.jpeg692×871 73.2 KB
Obvisouly the EA is applied only once since you can’t apply 2 EAs on a similar chart which I find yet another major flaw of MetaTrader. I wanted to use a custom Risk Manager and Order Helper from within the same view (for convenience and because I don’t use multi monitors and I prefer not to switch between multiple charts) …nope I had to choose between the 2, so I dropped the RM monitoring status with a deep concern.

There will be use cases for other platform providers. Trust me, some will just never look back after the switch

not mastering the administrative powers yet, @CavaliereVerde you gotta be my savior

https://community.darwinex.com/badges/3/regular
As regular you can recategorize (move and rename) discussions.

@CavalierVerde, if only I knew how. Anyway, I’d shy away from this task

you have a better overview at it from experience.

If you got an EA that could draw on chart “association lines” between entry/TP/SL (or just TP/SL), and manage to shift slightly (auto-placement) between grouped association lines so that they don’t overlap so that I could distinguish order groups clearly, I would be willing to pay for it eventually.

By associaton lines, I am meaning something like simple vertical segment links identifying tied orders apart

Especially since TP & SL orders are in fact the very same color which is enough to drive me nuts when the orders are very clustered all over and that opposite sides blend.

The only option as setting would be the spacing between the vertical lines when numerous ones adds up, at best.

If you have the skill and purpose, or luck at finding this treasure, thanks in advance.

Not sure, That could need about 2500 lines of MQL5 code

Are you looking for an ADR indicator for MT4? Today, I'm going to show you what is, in my opinion, the best average daily range indicator for MetaTrader 4.


Actually just a single number for the given day would be satisfactory (intraday level projections, optional)