As I have already mentioned, a Darwin 4.xx is a fully modeled structured product, with no real track-record prior to early April 2017.

And in any case, a ‘notional’ Darwin so the one that is listed on the exchange, is by definition entirely virtual.

Only the Darwins in the investor portfolios can claim a true track-record.

The credibility of Darwins 4.xx listed on the platform, lies entirely on the quality of the modeling, or to use a common language, the reliability of the back-test they are.

Now I have just found a rough fault in the modeling of the divergence in the emblematic case of Darwin DCD.

This Darwin suffered from a very big divergence problem, with at least a 30% difference in historical yield between the notional Darwin and the replicated Darwin.

So the positive historical divergence displayed on the new Darwin constitutes a problem of credibility in my opinion. See an ethical problem.

A concrete case of massive negative divergence on Darwin DCD. [image] I contacted support to find out why the investment is still allowed. For educational purposes, I share with you Bianka’s answer. We’d be happy to do this and protect current investors if investor volume was the issue behind DCD’s degraded divergence. The reason behind real divergence of DCD is the fact that it trades during the night and especially around rollover time. Specifically, a few number of trades with high diverg… 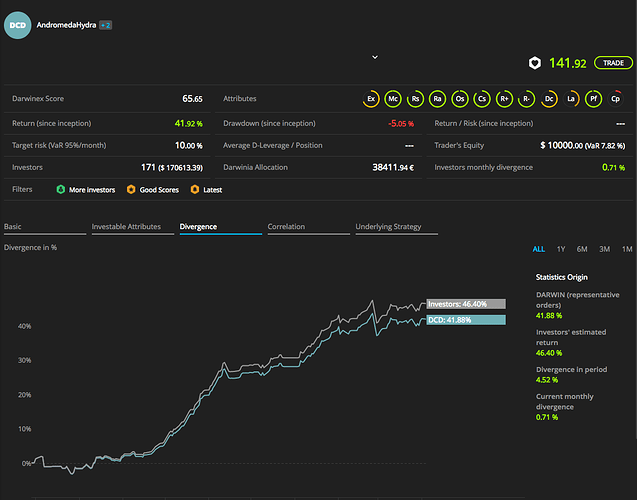 Here is a screenshot of the history of my real portfolio that proves that the problem of divergence on DCD is real, and that explains that I am slightly revolted when I see a positive difference on the new Darwin!

The divergence shown in the darwin page is an estimation of future divergence based on the most recent trades of the darwin. The fact is that the divergence has improved significantly in the last days, and we prefer not to use past data from the old darwin, because we implemented huge changes in our execution engine with the reloaded. Let’s see if the divergence keeps low. From the moment that any new trade gets filled with bad slippage, the divergence shown will change accordingly.

Hi Javier, and thank you for taking the time to answer me.

I have no problem with the current value. I see the value of offering modeling to estimate the replication capacity in Darwin’s future evolution.

What shocks a little is the result of modeling the past based on a current value that is obviously still fragile.

To see what this will give when the current value will be refined by a more consistent history of real data.

Yes, i agree partially on this. The divergence value is really sensitive, and is a matter of having like 20 new orders (10 fully closed trades), to have a really good aproximation of what we can expect.
If we took the past data, as i mentioned, we could come to wrong conclusions, because we introduced some developments that should improve the slippage for certain darwins. If things are now better, we were penalizing DCD for example until he had reached 100 new orders, which are the ones we take into consideration for the calulation of estimated divergence.
Antoher thing you must take into account, is that for the purpose of this calculation we only use the slippage on those trades with lower latency than 400 ms. The reason is, that any other orders with poorer delays, should not be reasonably considered, because the slippage would be too affected by the latency, and not the liquidity available in the market. This is one of the reasons that the divergence of real investors and estimated divergence can differ substantially in some specific darwins.
Another option could be using all orders for the calculations, something we already tested, but if we did this, the estimated divergence would fluctuate a lot, and would be too dependent on a few orders, giving us a wrong estimation of the real divergence, the one that depends of the liquidity and market volatiliy in the market when the trader makes the trade.

Can I suggest you continue calculating the divergence as you do right now (as an estimation based on the past trades) and also reflect the true divergence that investors have suffered in their real portfolio?

This proposal is for the new darwins, since you made some changes, but this way, we can know the real divergence suffered in the past, and not a divergence that is changing as trader change his way of trading.