Using Support and Resistance Levels, we determine the best entry for optimum Risk/Reward.

Why you should invest with PPT?
I would like it for you to join me on my journey with PPT. PPT has been run on broker accounts other than Darwinex. PPT has survived Flash Crashes and Recovered. Good money management, low stable VAR is the key to success for PPT. With PPT you are sure that open trades will have reasonable safe lot size that even a flash crash like that on the Pound (OCTOBER 2016) would be survived.
No overtrading. PPT doesn’t overtrade. In a month, PPT only executes less than 15 trades, because of this EXP has been kinda slow for PPT. With time however this Darwin will prove that fewer trades doesn’t mean fewer profits.

*2018 Update
PPT has undergone massive changes since it has started, one thing that hasn’t changed though is that PPT don’t overtrade. You can see in the history that PPT has chosen its trade very wisely. Over the months trades have become lesser but profits don’t. Profits for 2018 has surpassed the previous years.

*ESMA Leverage Update
PPT isn’t affected by ESMA leverage update, PPT only have less than 15 trades a month and is of very small lotsize.

Congrats to PPT for beating its old High.

All trades are closed for the moment.It is a good time to invest on PPT.

The most recent closed trade with a PERFECT Precise entry and exit.
AUD/USD

Happy 2018 Everybody,
PPT is ALIVE and Kicking.

Here are some screenshots. 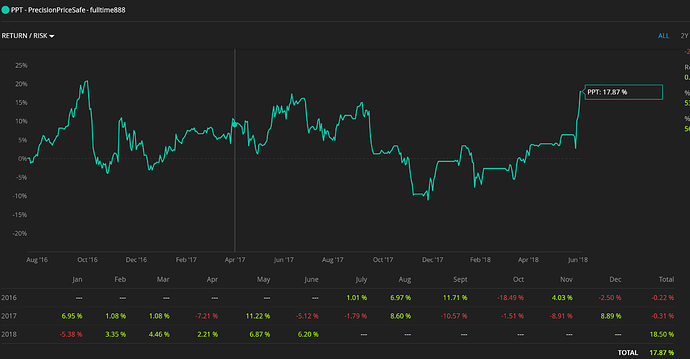 As you can see the underlying strategy is even more conservative than Darwin Algorithm, netting a total of 24.56%. 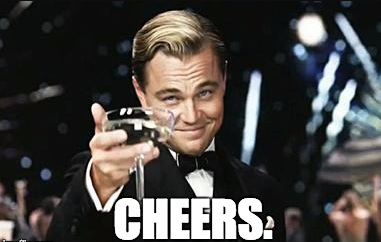 Congratulations, keep it up!

By the way ESMA Leverage won’t affect PPT as PPT uses very small leverage only. Thanks! 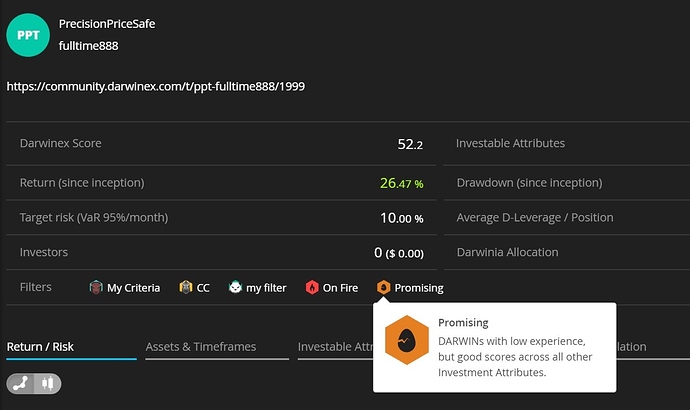 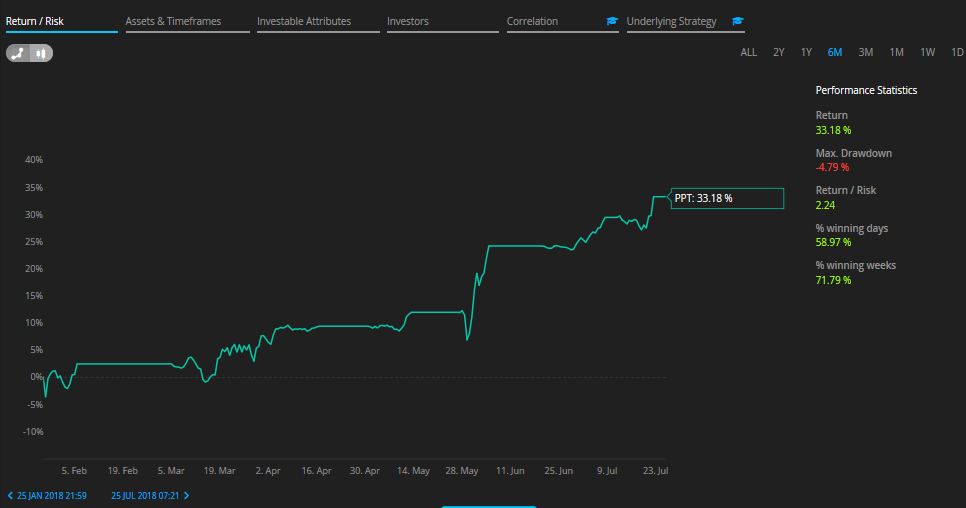 Thank you for the encouragement!

Hopefully will get my first investor soon. Hope it also ends with a darwinia reward this month. 1 more week before closing of July and Darwinia fluctuates alot. As of the moment PPT is inside the top 48.

1 month since last posted.
Here is an update of the underlying strategy

Good money management, low stable VAR is the key to success for PPT

last year performance very good! congratulation! all the best to your darwin!
one of the best darwins that perfectly fit in one of my “crazy” ideas on darwins…
OldSchool

last year performance very good! congratulation! all the best to your darwin!
one of the best darwins that perfectly fit in one of my “crazy” ideas on darwins…

Tell me more about your “crazy” idea for darwins? What criteria are you looking for?

1 Year Since I last posted this.
Stable Slow, Sure.
Invest Now. Alive and Kicking.
Search for PPT, leave for 1 year, see result!!
JULY 2018 BEFORE

Just an update on PPT.
Since no one is investing here, i decided to source investor somewhere else. Soon would close a 20k USD investment deal, invester would copy trade using darwinex.

Just an update on PPT, incase you want to join the ride.
Currently no trades open.

Since no one is investing here, i decided to source investor somewhere else

Bringing an external investor to join Darwinex (to invest in PPT)

Being funded in another platform (If so, do you mind to share where

Thanks and congratulations for your DARWIN

Hi SECURIX, i mean bringing in to Darwinex, this external investor I sourced from a nearby city I live. Basically the way brick and mortar business works, you have coffee and ink a deal.

Since no one is investing here, i decided to source investor somewhere else. Soon would close a 20k USD investment deal, invester would copy trade using darwinex.

I like your thinking. Win-win-win to all parties. Keep up the great work.

Darwinex is really a good platform.