So you can burst a Darwin in 1 hour from a mad algo?

Pretty failure from the lack of protection from the VaR here, with -70% realized in about 1 hour time. Although, an investor could (should ?) have planned a stoploss in advance.

On that day, about 2500 positions were fired up during a 1 hour window, which appeared to be far outside the usual behavior. The D-leverage however was within control so the Risk Manager really did not stop the bleeding.

Probably a coding mistake of logic of the EA or applied to the wrong timeframe, ticks instead of Mx ? Here, the mess is all over, maybe shooting wrong trades in both directions within a same candle, don’t know for sure but the acceleration of pace was heavy. The analysis in details is not eased from the consolidated reports of that 31st january 2018 which seemed to be a pretty ordinary day.

Considering that Darwinex has many algo strategies on its shopping stands, better not be a bad luck investor who’s accustomed to walk on a landmine going outside.

Aren’t algos supposed to protect us from such a trade frequency unexpectidly shooting through the roof outside all reason ?

If protection on this point shows technical failure into details, maybe it represents an argument for strategies to specify whether they are manual or algorithmic.
Probably, it wouldn’t have happened to this extent to a discretionnary bionic/trans-human person yet. So investors could also make educated choices along this path.

Some kind of protection from this would be indeed a good thing to do from Darwinex.

It can happen very fast if you are not careful in programming. SInce per strategy i only have 1 trade a day i use a flag which makes it impossible to enter a new trade after the first for whatever reasons gets closed, this saved my once from an similar accident. I had updated a strategy and changed the magic number, but anonther script (different strategy) used the same magic number. And by poor coding script B closed the opened trade of Script A instantly. But the entry for Script A would have been valid for a longer period of time. If there wouldn’t have been the 1 trade per day flag/limit per strategy i would have had the same crash…

Maybe Darwinex should go into a kind of protection mode once a Darwin fires to many trades (shorter then 2 min) in a row (open and close, not with averaging).

HI @NapoleonDynamite,
strange to see someone talking about something with so “small” importance…
in reality things are not exactly as you describe:
31/01 12h D-leverage 2.85
31/01 15h D-leverage 19.86
31/01 16h Profit -0.72% ( more then in time to avoid possible investors loses…)
everyone should create personal opinion in what really have failed here!
OldSchool

There is a limitation to 100 open positions, as far as I remember. So there should be added a limitation to- for example- 100 trades per day and maybe 50? trades per hour to protect the Darwin. I always thought that the LPs dislike high frequency trading

which this is definitely NOT!!

If you look close the d leverage just went up when the underlying account was nearly dead allready (close to -100) this was just because the last trade can’t be smaller then a minimum lot size, d leverage was proportional higher, so you are wrong

It was for sure a loop of the EA, translation of the Darwin discription says the same.

@OldSchoolPT Hum we analysed that the increase of D-leverage happened as a last resort attempt at the end of the 18th hour, when the harm was already done. Not you ?

Anyway, if it were true, your analysis would make things worse since it would translate into a RiskManager failure ? Normally you can’t train the RM to adapt within such a short period of time.

Just to make it visible look at this:

the “gap” are hundreds/thousands of 0.00% trades so the drop if this darwin was commission + spread only 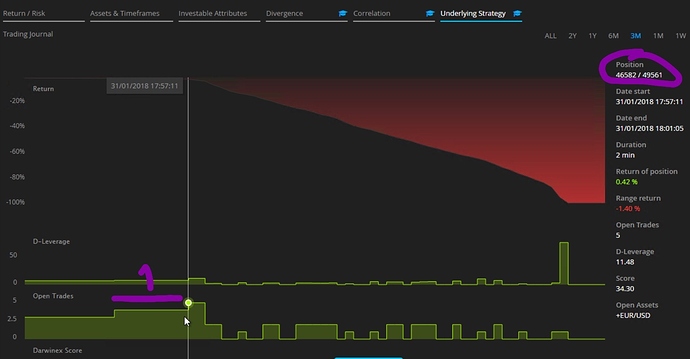 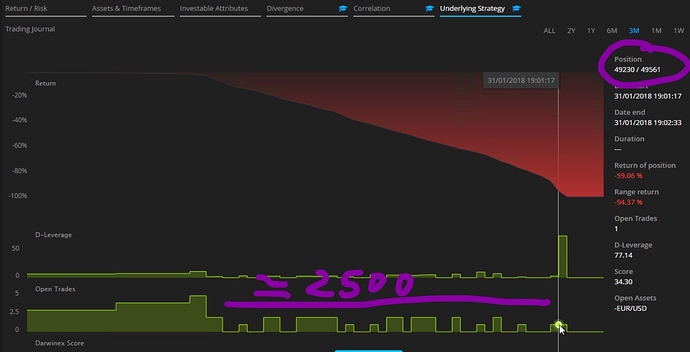 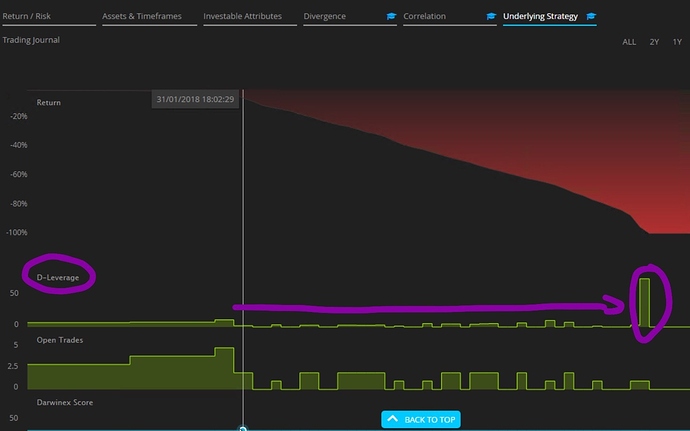 to be more rigorous…

Capture1.PNG1068×455 20.6 KB
what matters here is: even wining! a Darwin SHOULD/MUST had close all positions for investors latter at 16 PM and not open any more!.. that would be what any potential investor is waiting! and yes that will be a good service, not any excuse!
OldSchool
3 Likes
CondorcetInvestment 4 March 2018 15:05 #10

to be more rigorous…

what matters here is: even wining! a Darwin SHOULD/MUST had close all positions for investors latter at 16 PM and not open any more!.. that would be what any potential investor is waiting! and yes that will be a good service, not any excuse!
OldSchool

What certainly not matters here is bullshit about 16 PM.

What matters here is risk technology because of bugs.

Yep, sometimes i think he just wants to see whatever proofs his view/opinions

imagine you normaly trade 0.01 Lot per 500€ equity. As soon as you drop down below 500 (and you may always round up to the minimum) leverage of each trade will grow and grow, step by step until there is no margin left for a simple 0.01 Lot trade. This whole situation is the worst that could happen to any EA, so coders should double/tripple check that this will not happen! Darwinex risk intervention would intervene after 10min of an open trade, but not such short trades, some not even 1s long. It’s a complete different story.

But for sure there could be some logic added to the risk manager to avoid this for investors, but this has absolutly nothing to do with the chart you present us, this one i bugged, thousands of trades in a row killing the average calculation.

The last 100 trades of the 31st of Januar look like this: (with leverage from ~20 to 200 for the very last ones, so the 2000+ trades BEFORE had below 20 which is not HIGH. the last 50 or so just killed the chart calculations of average Dscore with values skyrocking, because of the nearly empty trade account.

Also, notice that the strategy ran fine for a few months before the accident. Then only an adjustment was made causing to exit the rails. This is typical human mistake escaping routine vigilance applied to finance (Knight Capital was a spot on backup evidence)

Investors need to take into account that dimension of algorithmic trading if Darwinex isn’t looking over their shoulders. Just saying

Hi @CondorcetInvestment,
for those that think things are not related perfect no problem with that…, but for others once again: D-leverage, is important ( i have post several posts…), impossible to ignore it, as many other important things…
once again, not hard to understand, that alert long before 16 PM must and should make all difference, why? simple ( no Mather what is happening in trader account… not possible to make omelette with-out eggs but… ) the only thing is that a suddenly 10X increase will have catastrophic effect in investors no other possibility| ( if there are any) , and that , independent of motives in trader account, can and should be avoid, how? simple, for example take D-leverage in consideration on risk manager algo, that acts “instantly”…)

i respect all do not agree, but this is my opinion,
OldSchool

Fore sure, me too : I make an omelette then… I brake the eggs.

I could say that everyone should trade only once per market like me but it would be bullshit.
I think we all shoud do an effort to be more open minded.
If my investor portfolio is going very well is because I am investing traders beating the market differently from me.

Here we have a clear bug that have to be solved with a fix to risk manager, possibly a fix that doesn’t reduce the profitability of good darwins, because that matters, not a crazy algo executed by a a crazy guy.

that alert long before 16 PM must and should make all difference, why? simple ( no Mather what is happening in trader account… not possible to make omelette with-out eggs but… ) the only thing is that a suddenly 10X increase will have catastrophic effect in investors no other possibility|

THIS IST WRONG i tried to explain it to you, i am sorry you dont understand it.

One last try… e.g. every trade was even just with 0.01 Lot now he starts with maybe 2000$ account balance and now opens and closes 2000 trades with average loss of 1$ (commission + spread)

The chart with you imaginary “jump” at 16:00 is just an result of the simple average of the last (maybe 100 trades) but this is BROKEN due to the fact that there are THOUSANDS of trades. SO now after the restart he has do to at least the ammount of trades which are used to calculate this stupid average) before it will NOT DROP because there are some douzens of up to 200 leverage trades complety killing the average!! But these last maybe 50 trades with a freaking high leverage are not important at all because loosing the last 50$ after you already lost 2000 is nothing. A “instant” leverage intervention could have made nearly NO difference except maybe saving the last 5% of loss! because with the ammount of trade the dleverage is increasing very slow at first, just the very last trades crushed all boundaries.

Indeed there is no safety. Still, you can qualify where a great degree of risk could come from.

A fat finger / quantity mistake, could happen to a sleepy discretionnary trader even more so than to an algo. However, the risk manager would block it for the end investor.

About a rafale of trades, a discretionnary trader would do it (half) consciously. Here the algo was not stopped for a full hour so probably there was no close monitoring at boot. The problem lies that the Risk Manager let it live. Then the association algo + no sufficient algo / no human consciousness = bad

In fact, there can be a safety net as stoploss on the investor side. I am not sure how many use one in all cases but it should probably be encouraged. Because the VaR is only an adjustement made out of stastitic, less so of a strict risk control measure, unfortunately

I think that a solution similar to that suggested by @Journalist could be enough.
I would put a limit of 10 entries per hour, it would not be more invasive than the limit of 10 minutes per trade.

Yes or even just a few trades (with less then a few seconds) as a maximum. And only if it opens and close (not if only open).