A survey for algo traders:
are you using a VPS (or dedicated server) or a personal home server?

Sorry but it lacks an element to your poll, besides the most important, namely dedicated servers !

And if it possilbe a powerful dedicated Xeon server cross-connect with the servers of Darwinex in Equinix LD4.

If your ping to the Darwinex server is more than 0.5 ms your technical environment is not optimal …

Ok I will edit in “VPS or dedicated server”,
my aim was distinguishing remote and local solutions.

I cannot edit the content of the poll anymore but I edited the header.

Good topic to poll about.

Talking about VPS, I think the teaming up with Beeks is quite limiting. While I don’t want to sound like marketing alternatives, whose name I will not use, I do believe there are alternatives to Beeks also in LD4 giving more powerful hardware than Beeks for a similar price. One thing Darwinex could improve on is teaming up with a few more VPS/Dedicated server providers and give clients discounts.

That’s all I got to say, I don’t want to give names.

Talking about VPS, I think the teaming up with Beeks is quite limiting. While I don’t want to sound like marketing alternatives, whose name I will not use, I do believe there are alternatives to Beeks also in LD4 giving more powerful hardware than Beeks for a similar price.

I agree that the Beeks VPS are not famous. On the other hand I believe that Beeks has a kind of exclusivity on the X-Connect to PrimeXM, and therefore to the servers of Darwinex.

In my experience, the best solution is their dedicated server. Of course, these costs are not negligible, but if you apply price weights to performance, the price of dedicated servers is very attractive compared to VPS.

I got the Darwinex discount on my dedicated server, but it seems that Beeks no longer agrees to do so. In addition as Swiss, I do not pay VAT. And if you take into account the fall of the pound against the Swiss franc, my dedicated server is a reasonable luxury.

Here is my take on this. I have used Beek’s dedicated servers and VPS at the end of 2012 when they were just setting up most of this stuff. I was running a couple of Tickscalpers and giving them constant feedback on how their changes improved or worsened execution. It was a great experience, I learned a lot and they could improve their setup.

However for most use cases having a cross-connected VPS or even a cross-connected dedicated server is an absolute overkill (unless you really need to fight for thin liquidity). In case you are scalping during pre-Asian hours, trading high volatility breakouts or pullbacks you might profit from such a setup.

During the above-mentioned testing, often my frankfurt based server with 30ms latency got into a trade faster than their cross connected vps. Using a vps in comparison to a dedicated server has two main disadvantages:

This has to be taken with a grain of salt though as I have not used their service since 2014.

even a cross-connected dedicated server is an absolute overkill

You are completely right. Paying for a ping less than a millisecond for a run on MT4 whose threshold of execution speed is 30 milliseconds in the best case, is nonsense.

I would say that in some extreme cases, the X-Connect, so the absence of the passage through the internet, can bring an advantage. Indeed, on a market incident, being the first in the queue can help …

As my wife vetoed the 8-cylinder Camaro, let me show off with my server at LD4.

First 1.5 years used a “forex” vps hoster paying about 20$/month. It was ok, but not really good, they had bad customer service. Now i just use a german VPS hoster with a very cheap prepaid plan. It’s nothing specialised for forex, but works fine. I got more power now for even less money. I have 13-15ms latency with my 2 brokers so far. I am not willing to pay like 10-20x of the money to get these last ms’s. I actually dont even think that my EA would run any better with better latency

It’s nothing specialised for forex

Unless cross-connect is a theme, you should avoid VPS ‘specialized for forex’.

Apart from the prohibitive price, this specialization can have perverse effects. Indeed, during a massive increase in market volatility, EAs can create a significant peak on CPU resources demand simultaneously on a large part of the VPS and generate momentary freeze of platforms.

I saw it with my eyes, for example, by Beeks.

At home I have about 35ms to Darwinex servers. I don´t think my EAs needs better latency and never observed requotes or more than 2 pips slippage. What is your advice about staying at home or moving to a VPS? I am considering using Amazon web services.

VPS is better for stabillity. They know what they do (at least they should) and the servers are running 99.99% of the time. If you stick to your home server you will have a much higher risk of failure (electricity, internet connection). + higher latency

Out of interest does anyone have a definitive number on the latency from beeksfx to Darwinex?

Now that both the major cloud providers have locations in London, both locations ‘hidden’ but rumoured to be very physically close to LD4 and they have direct X-connect to Equinix, they might be better value.

Only pay when they are running, so you can turn them off at weekends, and the massive resource behind them means you should never ever get any bottle necking on server resources.

I use a home server at the moment for all my testing with around a 9ms ping time which is more than fine. I generally run everything live on a cloud machine just for the uptime reliability, even though my home server is behind a UPS.

Out of interest does anyone have a definitive number on the latency from beeksfx to Darwinex? 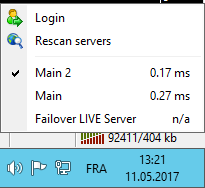 Here is a screenshot from my dedicated x-connect server at Beeks.

Thanks to you, I just realized that there are now two real servers at Darwinex

One of the arguments of the X-Connect, it is not only the ping, but the fact that one is isolated from the internet. So those who are in X-Connect can escape some connection problems.

Yeah, for people not worried about ping having it directly connected is also very helpful incase of carrier issues. Although as long as whatever hosting you use is connected to a tier 1 provider and their network is up you should be ok. I’m going to test the ping from the new AWS and GCP datacentres in London when I get a chance.

I’m going to test the ping from the new AWS and GCP datacentres in London when I get a chance.

Let us know about your investigations.

For my part I expect the opening of the first DataCenter of OVH in London which should not be too long.

How does compare OVH and AWS?

The strength of OVH is to offer dedicated servers at very competitive prices. For the price of my dedicated server Xeon E3 with 8 GB of RAM at Beeks, I could have a real monster at OVH.

Personally I hate the cloud for automatic trading.

My personal opinion, and this is from deploying fairly huge cloud deployments in my ‘other’ job, AWS and GCP are the only cloud providers worth looking at currently. One of the big upsides with them vs some of the smaller cloud providers or the ‘dedicated server’ providers focused on automated trading is their scale usually equals reliability. They loose millions for being down for even a few seconds.

Any AWS/GCP machine should be considered the same as a ‘dedicated server’ from any of the VPS providers aimed at forex.

Not sure on the latency yet but I think they both have direct connect to Equinix, not sure if its directly LD4 or a different one then x-connect, but in theory it should be pretty low latency.

Any AWS/GCP machine should be considered the same as a ‘dedicated server’ from any of the VPS providers aimed at forex.

What I noticed, for example, at OVH is that high-end ‘cloud’, with dedicated resources, and so on. Is often more expensive than dedicated physical machines, and even sometimes much more expensive!

@TraderTom
What can you suggest me? AWS or GCP?
I am running 2 swing trading portfolios, so I don’t need low latency.
The cpu load is below 10% of an old Atom processor.

are the critical factors for my needs.