I just want to show that it is less important to get the perfect Darwin but to have an investment strategy with well defined exits to make profit. IMO it is the same as with trading: money is only made when a position is closed, so exits are more important than entries.

All examples are calculated starting from Januar 2018 or the later PO of the Darwin.

These similar strategies should show that it is easy with a little monthly effort to keep profit made with Darwins if following simple rules:

Example One - Darwin XUX where grid trading technics are used. 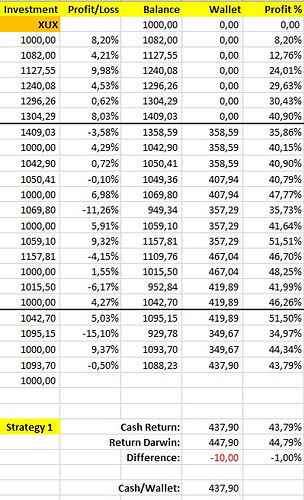 grafik400×656 144 KB
Even if this trader might use a dangerous strategy and is just still in profit, with this investment strategy it is possible to keep the profit once made in a save place. So there is no need to get an headace when the Darwin shows a month with more than 10% losses. 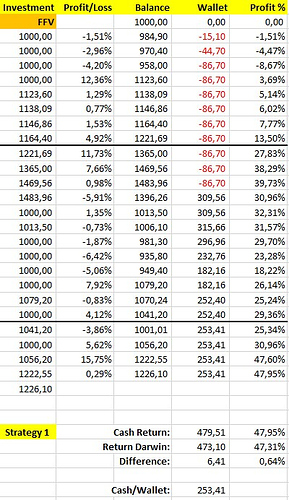 grafik400×692 153 KB
You can see here that the investment strategy makes nearly the same profit during a longer period of losing months last year and nice profit this year as a pure buy & hold strategy. It is not regarded that the 25% cash in the wallet made by it could be used for another investment and to pay investor fees. 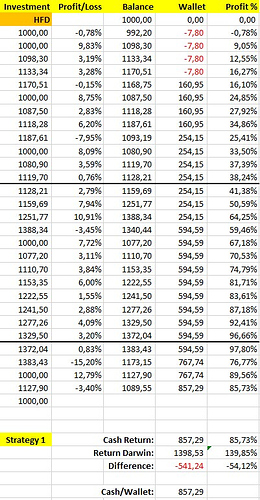 grafik401×771 178 KB
Of course here a buy and hold strategy would have made more money because of long chains of winning months, also after deducting investor fees. The 85% profit left on the wallet could also have been used for an additional investment after paying investor fees and that could cut the difference significantly. 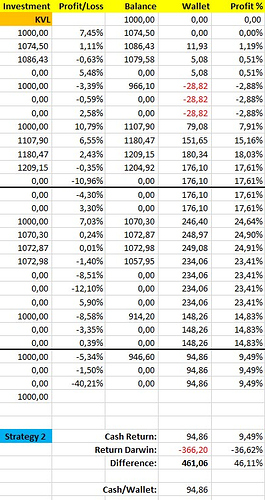 Example 2 - CVL with no profit since inception 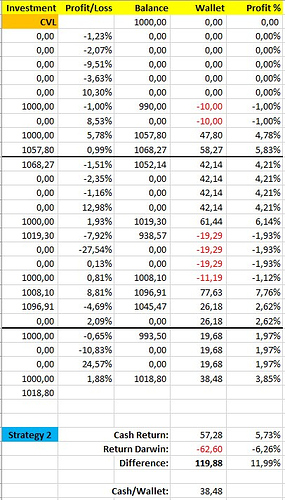 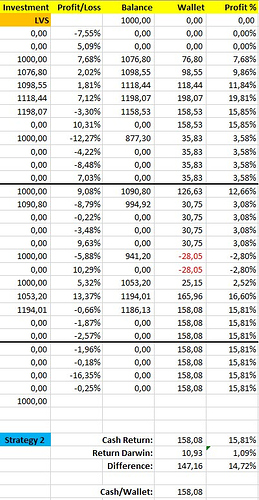 All 6 example strategies here together have a (hypothetical) pending profit of 244,90 € and brought cash in the wallet of 1,840.02 € (without double leverage and without investor fees). Besides these composition is not the favorite selection of anybody, it is just an example to think about defining your own strategy for a regulated exit (and reentry if you want).

Thanks for sharing the ideas. I think with investing as with trading you got to find the edge to maximize return and this 2 strategies might have it… at least they look promising in those examples.

I think investing in darwins is a very complicated subject, I’ve been thinking about it and when I’ll come up with my method I’ll share it too.

Your comment is very appreciated as I was thinking about publishing it since weeks and was not sure whether it would be accepted. I invented this idea with less Darwins as examples more than 6 months ago and my main intention is to motivate others to play with simple investment strategies as the holy grail might not be found here as a Darwin.

All 6 example strategies here together have a (hypothetical) pending profit of 244,90 € and brought cash in the wallet of 1,840.02 € (without investor fees) besides these composition is not the favorite selection of anybody, just an example to think about defining your own strategy for a regulated exit (and reentry if you want).

You really burned out your butt on this… thank you for sharing it with us. It looks very interesting, because if it works it can be used in many ways.
So, these examples look great, I have only one question for you…what is stopping you of being using one of these strategies on a real portfolio?
Thank you again.

what is stopping you of being using one of these strategies on a real portfolio?

Thank you for your comment, you made me smile

as you caught me

I am honestly thinking about it starting on the real portfolio from May. Currently I’m copying my demo portfolio there which is trading Darwins much more frequently than once a month.

As I don’t see a benefit for me doing the same thing twice and to make the real portfolio more calm hoping that will reduce the divergence I asked myself: Why not continue with the last winners and replace only the losers and hold them all for a full month? My filter delivers more than 30 Darwins where the manual selection gives me still more than 12 investables, but I want to buy only 5.
Even if I would use strategy 2 there is still enough stuff with 12 Darwins to find the good 5 ones with a profitable previous month.

Then the real portfolio will get an own thread.

Thank you for you answer.
Right now, it looks like one of the most (if not the most) interesting and I hope valuable post regarding investing on darwins.
So, I think it worth to test and analyze it deeper.
Maybe I am asking too much, but asking is free. So, is it a way you send me the Excel form with all the formulas of both strategies? (it’d save me time and you already have it done).
No pressure, just asking.
Thank you again.

If you don’t sell it without sharing the profit I don’t have a problem to share it.

The compressed file has 22KB. But how can I send without an email?

But how can I send without an email?

If you find errors or make significant improvements I’d appreciate if you want to share it.

I’ve just got it! Thank you!
Sure I will share anything valuable.

I just saw now that the field title ‘Cash Return’ should be ‘Cash & Return’ as it contains the sum of cash put into the wallet and pending profit.

I could open the zip file and I corrected the “Cash and Return” cell too.
Btw…it is so late in Germany, you are always up that late? Lol
Thank you!

but I will leave the computer now for tonight.
Have fun with the xl-file and I hope this post helps also others.
Godd night.

Thank you for sharing your research! Very fresh ideas, treating DARWINs as an asset class on their own. Please keep us updated about your findings regarding these or similar portfolio management logics.

Thank you for the compliment. To improve or renew Darwinex to the next level it needs fresh ideas.

Investors should learn to define an exit without disappointment and traders must learn to accept it.
There is no need to share a DD period with investors.
The investors in my examples come back for investing again and again knowing that they can make profit also with unspectacular Darwins, because they have a simple exit rule which is free of emotions.

Strategy 1 is the more common one to use for many Darwins if a long term investment is planned. Strategy 2 is for Darwins with longer DD periods (in the past and expexted, like LVS) or for trading friends investing in each others’ Darwin. It saves profit and investor fees made in the good times and avoids losing it again in bad times.