Intro
I will attempt to explain how the system behind WNS works without giving away to much, not really sure about where that is but lets have a go.

As a preface i did trade the darwin using another system during the first two months, the rest of the time i’ve been working at getting it back into profit. The other reason it took so much time is that i did not follow the trading rules of the system, i simply thought that i know better then what i’ve designed myself for all these years.
Yes i know it’s a bit silly.

History
The system trades one currency pair per account and i’ve run it on multiple mt4 accounts at the same time since 2013. Usually i’ll have about 4-7 mt4 program running simultaneously trading the strategy and even though it has evolved somewhat it still does keep that very same basic idea, which is that price will come back not all the way back but if i can see the good prices then that is enough. A rubber band of sorts.

General idea of the strategy
The strategy attempts to make a soft stop out of a stop loss by dividing a position onto several smaller ones and/or opening a reverse position as profits are generated such as to lock the profits into place. Later on after a set time designated as a “cycle” the trading system will either close out the profits or hedge them into blanket risk.
I do this manually with the assistance of an EA that has bit over 10 different functions. Yes, one of them is to keep track of what i do

Trade example
I’ll give an example of this here.
Let’s say i am long GBP/USD with 0.1 lot.
To balance that out i may have 2-5 sell stops below the entry of the long position such as to create equilibrium in overall market exposure. If the positions are 5 in number then they are 0.02 in size since 0.02 x 5 = 0.1
Later on if i am in profit with with 100 pips i could decide that it is a good idea to keep them, there i’d place a stop loss at 10 or 20 or some amount of pips above the entry. Here i lock the position in profit, yes i know about gaps in price but normally that works and then i can collect those profits later on or maybe trail them for more.

A very simple trade signal could be to follow an RSI where if the indicator closes over 70 price is to high and if price closes below 20 price is to low. Each of those could be an idea to go long or short. Do keep in mind though that this example is severely oversimplified.
Normally i trade the system using entry signals from price interpretation using price action order flow / tape reading.

Trade cycle
So by this point you may understand that the reason for the recent big win is that profits where realized and one such cycle was completed, this is correct. You may ask how long such a cycle is, the answer to that isn’t really able to be defined in time and hours but rather it is about corresponding to the price and market flow, think of it as a wave in price where you buy something at a cheep price it becomes expensive and later it is cheep again and that’s a cycle.

I do trade the system on an hourly basis and if i recall correctly the average hold time is about 2-3 days normally. There should be about 2-3 trades a day also, though that may change but it is not something set in stone.
As with many things in the system it is designed to be dynamic and not use any static values = i won’t close a position if there are X amount of pips but rather i’d adjust the risk control for that position once the market shows me that the profits look as if they may not rise anymore.

The strategy aims to take advantage of “good” prices in the market and attempts to lock them in and trail the profits using several mechanisms. In the end i am the one deciding where the price should be and i’ll buy and sell (short and long) towards taking advantage of that, as i said.
If the strategy can ride long trends then it will try to do so. I call it mean reversal hedging, not sure if that’s really correct but hey i did name the strategy…

That’s all for now i guess, post questions if you have them. Or you may find some answers here http://alexandertatsumaki.weebly.com/ but i haven’t really updated the website in a long time now.

It’s a pleasure to welcome you to the forum @alexandertatsumaki! Nice introduction! Keep up the good work and come by from time to time to post updates.

Today i thought i’d show some ideas i have in my head currently for the market pertaining to the WNS account trading the symbiosis trading system.

Some ideas as of 3 May

On this first one i show what i’d like to happen in the market, meaning i am currently a bit short the GBP/USD and the first level at 1 represents where i consider starting a new cycle for the system. Another lower level is also shown which if reached without to much weight picked up along the way would be very nice.

I’ll also show another broader H4 outlook with some levels:

On the H4 i’d say that market looks like it does not know what it wants and either way i stand to be able to trade it on levels. I am short as i said though so let’s see if we can go that way.

Also before i go let me just share this also:

It’s very nice to see that the few that has stayed as investors have gained some 50% so far. I like it!

Here is the next image. (this is the second post, scroll down)

Now consider that this is an example and it does look so obvious, i did select these 2 trades to show a point. There are many more on the chart but i do not show them. I also only show part of my ideas. This is only to illustrate how i think in my price theory. 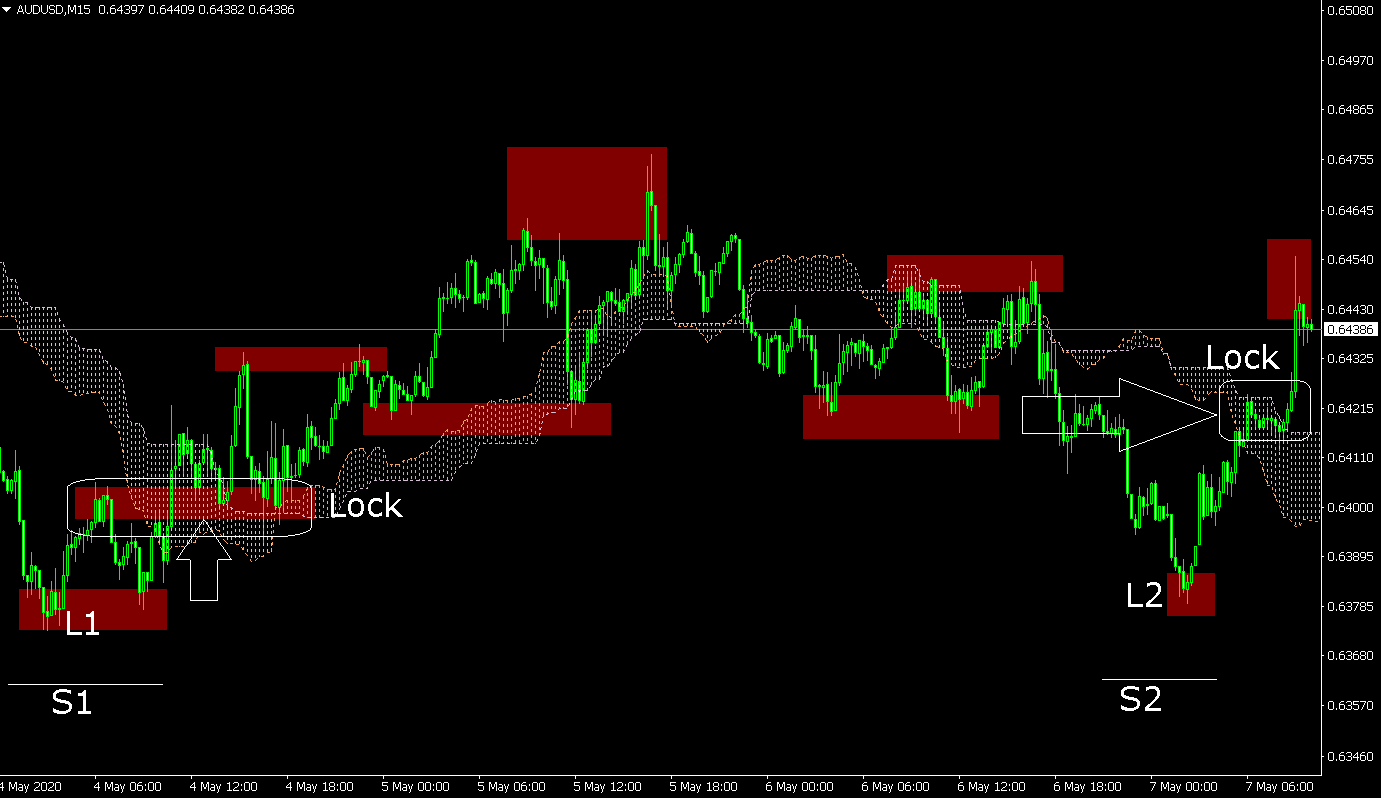 Here i have swapped out the red line displaying center and use a more vivid kumo indicator. Mind you the indicator is not needed, it only shows what i want to point out, which is price potential center. Price areas are now also changed from numbers to box zones.
I’ve also added 2 example trades to show how long positions could be handled. L1 or L2 are entries long, S1 and S2 are balancing positions. The big “lock” zones are exactly that, there price profits are realized by locking profits.

All very very simple and obvious, but again it is an example. I could trade this with only OLHC and there are many more parts to this but today i thought i’d only show some of it to those who are interested.

Today i though i’d provide some history of my ideas and price theory. (this is the first post)

I’ll show you a chart: 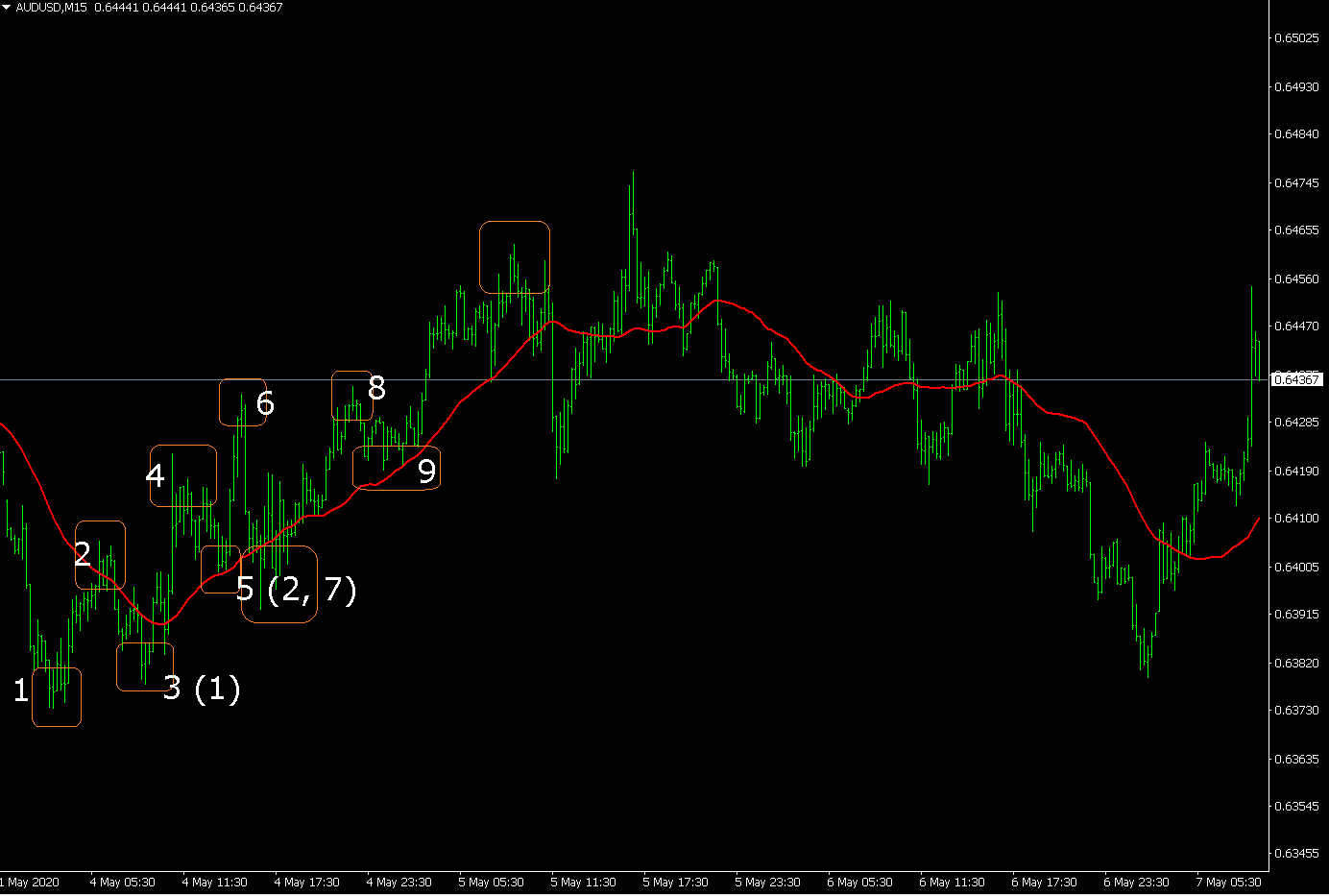 I’m here using the m15 AU chart as an example.
The orange boxes represent stair stepping, which after the fact provide proof of strength / reaction in price.
The red line illustrates my general idea = “price comes back to center after a while”. I’ll get back to that though.

Notice the numbers on the image. They show how price goes to one level (1) and to the next one (2), the numbers follow the sequence of simple math. In my theory i contend that these areas are places where price was either strong or resisted such that price actually moved. They are therefore important. If you ask me why then i do not really know why but the chart shows the movement and that’s what i look at really.

Now notice the red line, it’s a simple MVA 35 in this case. The line is there as a basic version to show that “prices comes back to center…”. One of two things come to mind then:

Well look at it this way, price does move up and down. Not really in a straight line and after some time price moves back the other way. Sometimes we have movements that retrace 30% of a move and sometimes we have as much as 130% meaning a reversal. If price comes back is not a question to me it is only a matter of how much, something that we cannot have the answer to. But the red line illustrates this either way, in a simple and very basic manner.
As for where the center is well that changes. Yes i know that answering the question then becomes rather simple if i can just move “center” but that’s really what’s happening in my theory of price.

What’s all this good for? I’ll show you, hold on…